With the help of a parent, Mike, I built another two tables yesterday and today. They look great. 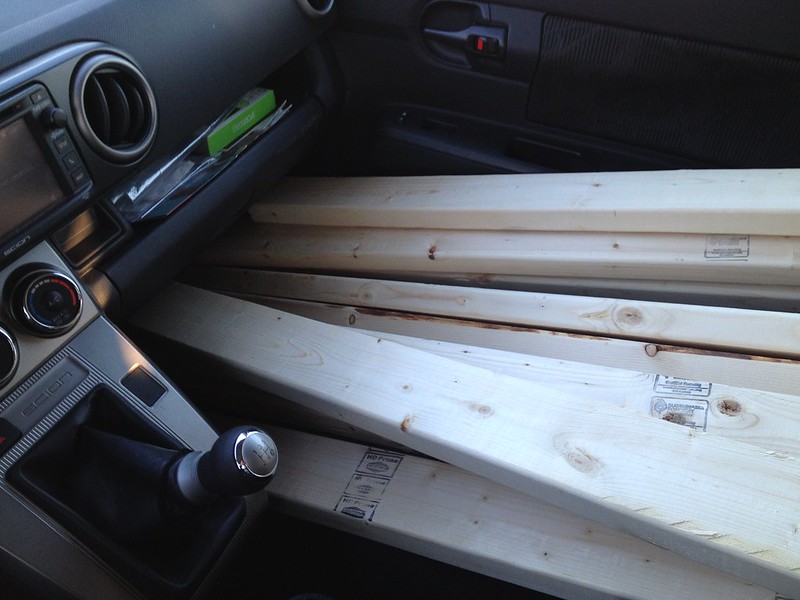 Mike was dealing with a cracked rib, and yet he, like me, was up and down from the floor to a standing posture all through Tuesday evening and Wednesday afternoon.  I have to credit him with tremendous endurance. And yet he said, “I can’t let it get me down. You have to work through things like that. Move or else.”

We spread the work over two days because I’d miscalculated how much lumber I’d actually need.  Oops.  I wound up making a 7am trip to the lumber yard this morning for ten more 2×4’s at 8-foot lengths. They fit in my car, but it was a crazy ride into school this morning. Usually my computer rides shotgun. Not today.

We’re getting better at assembling the frame of this particular workbench, too.  I took myself off to a local Harbor Freight Tools for a set of a dozen bar clamps, and  we used those to help us square and true the frames of the two tables.  Bar clamps are incredibly useful things. We used them yesterday to clamp a level to a piece of plywood, to use the level as a guideline for the circular saw.  A circular saw is likely to drift away from your cutline if you’re not careful, so the bar clamps hold the level in place so you can use the edge of the level as the guide for the edge of the saw.  Brilliant. Picked up that trick from Dan before vacation.

These are not complicated pieces of carpentry.  For maybe $200 in tools, and $50 in lumber, maybe $20 in fasteners, you too can build one of these tables… and then amortize the cost of the tools by building a bunch of stuff on the table you built. That’s certainly my intention — if I don’t get a few hundred projects out of these tables, I’l be surprised. Mike thinks they’re likely to outlast us both.

So the new Design Lab has four such tables now.

And Mike, brilliant and careful guy that he is, had a brilliant suggestion when I broached the subject of him helping me build the North Wall Workbench (it’s capitalized, because it scares me — it’s the most complicated piece of our construction plan).  He said, “So don’t build a thirteen-foot long workbench. Build this five-foot long workbench that you’ve got the plans for… and build two of these two-by-four tables. Two times four is eight; and eight and five is thirteen. It’ll fit perfectly. And all your furniture will match, and you can rearrange the furniture however you need it to go.”

Mike is my new hero.    He had a couple of even better ideas, too… extending the construction of the 2x4s from the legs up to the ceiling to be the frame for the peg boards for tools, and having the two end-tables of this construction be somewhat more idiosyncratic that our planned design.  But no matter.  He helped me get two more of tables built, he solved the ‘weird workbench’ design problem with some simple arithmetic, and then he taught me a few more carpenter’s tricks besides.

In the tai chi workshops over vacation, Doctor Yang said, “a well-considered word from a teacher can save the student a thousand days of empty practice.” It’s apparently a common theme in Chinese martial arts training.  But it turns out that it could apply to carpentry, too.

Mike remarked several times that we weren’t doing professional joinery work by a long shot, with something of mild disappointment in his voice. I said that didn’t worry me: we were building a quick-and-dirty workshop, not a studiolo for a nobleman. I asked him if he was a cabinet-maker, as well, and he snorted, “no!” laughingly.  But in our continuing conversation, I said, “nothing would make me happier than having a student ask if he could build a workshop in our workshop… that is, construct duplicates of our furniture to take home… and then doing it.”

May it be so. May a kid in school now eventually have the inclination and space to want to learn how to duplicate our tools for his or her own workspace.