Of late I’ve been making a Japanese-style robe or shirt called a haori. It’s a wide sleeved coat or robe, traditionally worn as a men’s shirt with hakama or samurai pants. I’ve been making them in men’s small, medium, large, extra-large, and XXL. For once, the XXL is the right size for me. These days, often, I have to go one more size up.

There are eight more I plan to make: one of them is a black-and-white fabric with musical notes on it; another is a white and black pattern with lots of science terms; one is a solid gray color; one is a Japanese fabric with a raised design in the fabric; one is a printed herringbone pattern.   One is a space field, one is a swirly pattern of gold spirals on a variable blue background, one is a dark blue with gold laurel leafs.

I’m learning that I don’t like production development much.  I’ve learned this particular pattern VERY WELL, making it eight times in a row.  I’m also getting bored of it.  To alter it, though, requires changing up the back and front pattern pieces substantially — moving from a two panel back piece to a four panel back piece; moving from a one-panel front piece to a three or four-panel front piece; and in both cases adding a lining.

Why a lining?  Why go to the extra trouble of designing a lining for such a garment? 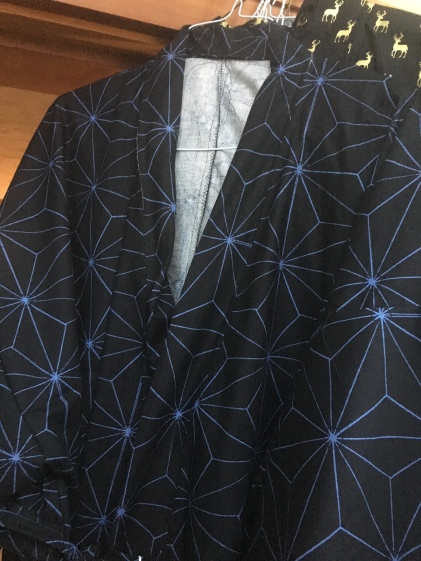 Well, because in these garments, the interior seams are exposed. A shoulder seam, a seam on the inside line of the sleeve, a back seam… these are relatively inconspicuous.  But the more shifts you make in the structure of a garment, the more that those seams touch on places where the skin is sensitive; where a seam can feel like a bug or a piece of detritus; where the seam can seem like something untoward or out of place.  Linings can reduce that sensation (so can a serged/overlocked seam, but I don’t have an overlock sewing machine yet).

So these garments will eventually be available on the Etsy website.  If you see one you like or you want one custom-made (especially in the fabrics described above), you should speak up now.