Well.  As you can see by the photographs, the Design Lab has moved to its new quarters.  We’ve gone from being in an 800-square-foot space with leftover desks and tables and shelving, and more chairs than we ever knew what to do with, to a 400-square-foot room — with a workbench, worktables, proper storage for tools and materials, adequate tools and equipment, plenty of materials, and as an added bonus, a highly-invested middle school student body.

For about a half-hour today during Activity Block, the middle school moved the lab.  First, we shifted the conference room furniture out of the old conference room, and into the new conference room (which is also the old lab).  Then, they formed a fireman’s carry brigade line.  We handed things to kids on one end of the line in the old design lab, and they slid into the new Design Lab just down the hall.  Once the stuff was moved, they moved the furniture that we’ve been building for the Lab over the last few weeks: the two sawhorses, the four tables, the three sections of the work bench, and the rolling cart.

I then spent a couple of hours after school organizing supplies and materials into boxes and categories. We’re replacing all the haphazard bins that used to be in milk crates, with brand-new bins.  The shelves are organized with most of the materials and parts on the two lowest shelves, so even the littlest kids can get at them.  Legos and lumber will sit on the floor, which I think is probably for the best.  The middle shelf, where those empty clear boxes are, will hold storage for team and partnered projects of various sorts.  The upper middle shelf — just below the gray crates — will be for after school projects and programs, like robotics and electronics.  And then the gray crates will contain overflow materials of various sorts that there isn’t room to store on the lower shelves, or that we have so much of that it will take a while to use them.  I’ve not figured out how to store electronics parts yet — they work better in small drawers and compartments, really, than big bins.  But for the moment, this is what we have got to work with.  It’s a vast improvement over what we had.

Then, on the north wall, is the three-section workbench.  There’s a picture of this at right.Eventually, this will be pressed all the way to the left wall.  Then we’ll build a cart for plywood and scrap-wood that fits between the right-hand wall and the workbench. Once that’s done, it will be easier to clear out the central part of the room.

The workbench is already set up, in part, with two pegboards and a few rows of French cleats. True to my word, I put students to work designing French cleats last week.  I can’t say that any student has successfully built or designed a French cleat that I would call beautiful.  But I’ve realized that this is an ongoing project: that every so often I’m just going to hand a kid a project to redo one of them, and say, “here’s what you have to (re-)build. Do this.”

I think the big thing is that I’ve been purchasing tools for the old Design Lab, which had big space and low-quality (and low-price) materials.  And now I have a smaller space, but higher-quality (and medium-price) materials, and the tool-set is going to have to adjust in conjunction with that.  I don’t yet know what that looks like, for sure.  But I know that what I have right now is merely the beginning of the tool-set, rather than the end.

In the meantime, it’s clear that we’ve made a good start on something amazing… but at the same time it’s kind of ironic.  I’ve spent five years trying to bring design thinking program to my school, and, in an effort to bring forth ‘a new kind of program’, I’ve now successfully reinvented… 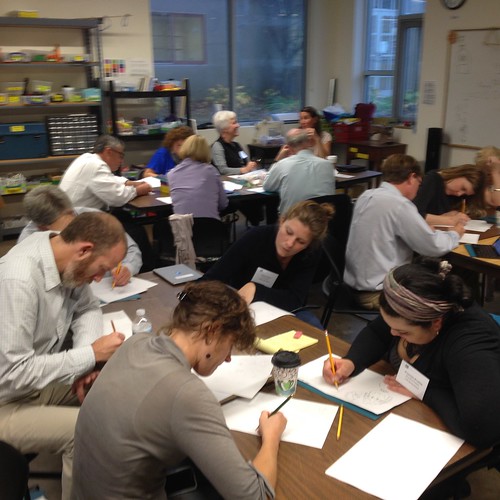 Now, there are things I’ll miss about the Design Lab, the old space. For one, it was nice to be able to get forty adults to sit down and work on stuff in groups of five or six, and make things happen. I don’t think we’ll be able to host this workshop in this format any more; or rather, we will, but we’ll have to ‘port’ the design lab into the new conference room space by using our rolling cart more effectively; and we’ll be showing off the Design Lab as a teaching model rather than using it for the conference.

I don’t think this is a bad thing, really.  It was always necessary to clean up and put away things from the students in order to put on the conference; but the mess in the old space never really quite went away.  But the new space is designed from the beginning to be available to small groups of students rather than large groups.  It’s intended to be a workshop or a studio experience, not a huge conference.  And this means that we’re going to create a higher-quality experience for our students.

It also means that we have to provide higher-quality professional development for our teachers. Not someone else’s teachers.  And this means changing how we think about our yearly workshop, too.