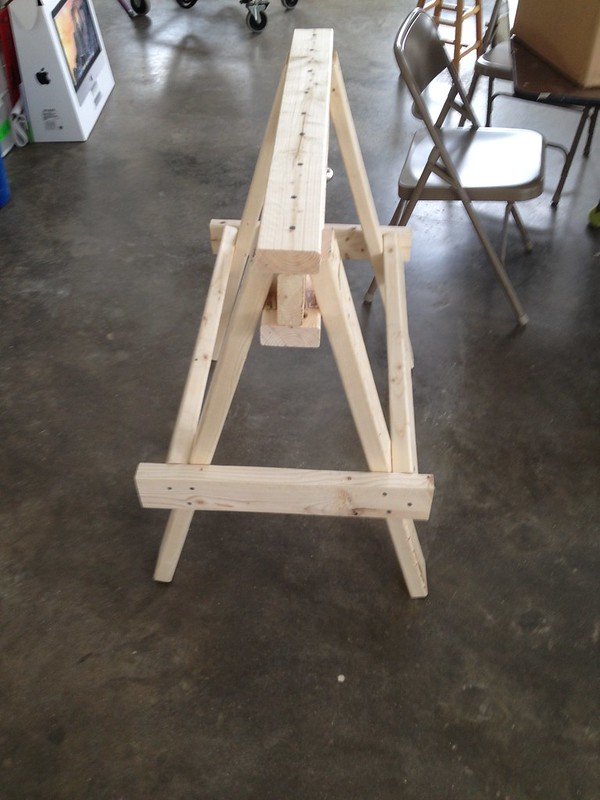 It turns out that you can build a sawhorse in an hour.

It helps that you’ve built an adirondack chair and a quartet of tables first, of course.

The construction is pretty simple: I looked at a bunch of plans on the internet, and found most of them overly complicated.  It’s not that they would be hard to build, although with the hinges for folding and the angled cut to make the legs level and so on, they might be a little tricky.  It’s that they would be difficult for students to recreate.

And as I noted in my post about the second pair of tables, I want everything in the lab to be replicable.  I want a kid to come into the room and say, “Could I build that?” And I want the answer to be “yes!” The little ones might say “maybe,” but the big kids should be able to say “Yes, definitely!” by the end of their time with me.

That should be normal. 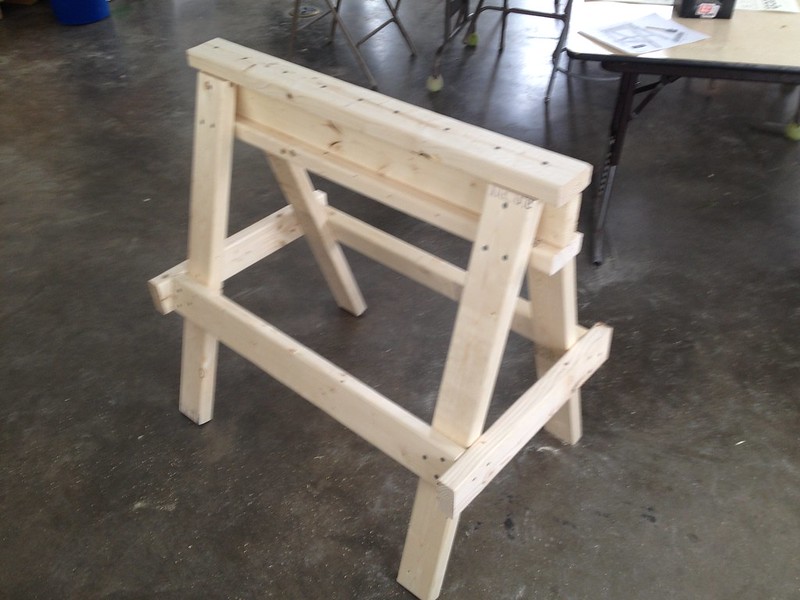 But that means that I also have to be confident that I can do it. So, today, I printed out one of those pictures/diagrams with the sawhorse measurements on it, and I built one.  All of the skills that I learned in building the Adirondack chair at Eli Whitney Museum came to the fore:

The tool-set is not complicated. The patience and care are… not exactly easy to learn, but come with practice.  The sense of transformation and accomplishment that result? Well worth the time.  Plus, it’s amortization of the circular saw, which cost around $100…  At eleven cuts per sawhorse, and sixteen per table… let’s see… one sawhorse, that’s 12, four tables that’s 64 and 12 is 76.  It’s cost us around $1.36 a cut for the use of the circular saw.  Given that we’re making three more tables (48 cuts), three hutches (estimated 22 cuts each or 66), a storage cabinet (30 cuts), and another sawhorse (12)… 76 cuts + 156 more cuts…  $100/232 cuts is forty-three cents per cut.

More than that, though… I’m beginning to feel that if we were told, “you have to be in the new design lab by Friday of next week,” we could do that. We’d move our stuff in, abandon what we’re going to abandon, and finish construction of our remaining equipment in the new space.

And that’s empowering to me.  I feel like I can pack up and move rooms, and not fall behind in my program.  I feel like I have power to get this done.  I feel like another couple of days of construction and we’ll be ready to go in a new space and new place.