Today’s 31 Days of Magic project is about making a talisman.  The projects are a list developed by someone in the Strategic Sorcery community centered around Jason Miller.

I went to dinner with my friend Matt last night.  Matt is a carpenter and a librarian, an unusual but wonderful combination: it means that he is a master of two of the great disciplines of Hermes and Mercury — the curation of information, and the many-faceted skills of measurement, geometry, design, and business acumen required in such a field.  We got to talking while making our libation to the silver-tongued god after work, and he was showing me some of the more complicated and mind-bending carpentry joints that are considered the masterworks of his profession.

One of them was a delightful little puzzle, horrifically moronic in its simplicity, which consists of four impossible dovetails on each of the four sides of a cube of two kinds of wood. The dovetails bind the light and the dark woods together in a configuration which suggests that it is impossible to separate them. Ever.  Equally distressing is the notion of how they’re connected to each other.  For in order to fit one dovetail in place, the other dovetail must not be in place.  And yet, BOTH dovetails are firmly and apparently immovably attached to one another.

I uttered a somber, and rarely-uttered cursing word.  People frown on the idea of teachers using vulgar language, and while one or two such words escape my mouth from time to time, I still try to purge them from my language.  This one was undeniable.  I said it again.

After a few minutes, I figured out how the puzzle worked, and opened it.  I won’t spoil the surprise, but suffice it to say that I was both impressed and dismayed: impressed at the level of craftsmanship, dismayed at how clever and how deceptive it was.  A delightful bit of Mercurial wit, made simply for the joy of it.

I said, “I don’t even get dovetails.”

Matt smiled at me across the table. “What don’t you get? THey’re not hard.”

I said, “I’ve watched all kinds of videos, read articles… the layout, the measurement — it just feels beyond me. I don’t know how I’ll ever get there.”

He swiped through a few more photographs on his phone, all of of wooden puzzles to tease, teach and delight (and which also all happen to teach 3D thinking, which is a cornerstone of what I believe is important about Maker education).  He found a photograph of the corner of a wooden drawer, and showed me. He said, “I won’t even buy a piece of furniture if it has drawers without dovetails.  I don’t trust glue. Fasteners work themselves free eventually.  Biscuit joints can’t withstand the stresses generated by pulling the drawer in and out.”

I said, “I still don’t understand how to measure them, how to lay them out, how to design them.”

We moved on to other topics of discussion.

Today, I realized I have a social engagement where I’m going to have to talk about Design, and Maker work.  I had an hour to figure out how and what I was going to do to make a talisman for today’s challenge. I wanted a talisman that would get me through that portion of every evening that always leaves me undone — what to talk about with people who are interested, but don’t really understand what’s going on.  I could use the mechanical devices I’ve built — but they’re not really portable, and difficult to manipulate.  I needed something simple. 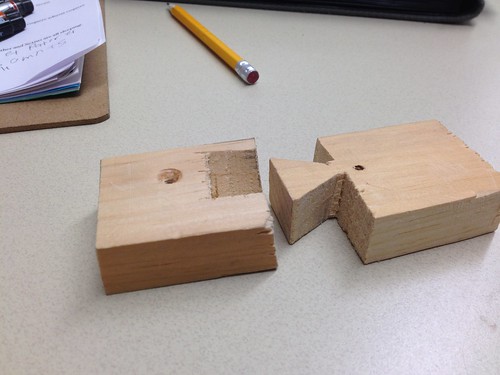 I cut a dovetail.  I sawed a block of scrap wood in half, trimmed off some bits here and there from another project, and I cut out the slot in one half of the dovetail.

Cutting out the slot first runs a peculiar risk of cutting too deeply, I found. And so I erred on the side of caution.  I cut the dovetail hollow relatively shallow. Then I found my first problem: how do you clear out the stuff in the middle of the hollow?  It can’t be there, but you can’t just reduce it to sawdust.  Now what? Chisel? I’m not thrilled with my chisel skills at the moment; and they’re dangerous to use, and it’s right before I’m supposed to go to a party.  I wound up using a coping saw, which was messy but worked.

Clearly next time I should use the chisel even if it’s dangerous.

Then I cut out the tongue which goes into the dovetail hollow.  It occurred to me during this process that there are probably formal names for all of the different parts of a dovetail (there are!).  I cut my first dovetail tail — that’s the correct name for it, by the way.  Cutting out the shoulders happened in three steps: first straight down, then across the base, then down the angle.  Next time, just cut the base and then the angle. That’s my guess anyway. 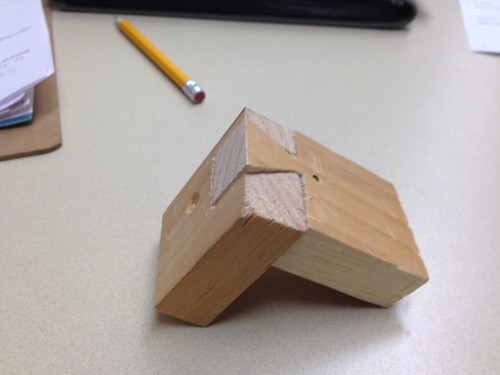 I now learned that I had cut the dovetail socket too shallowly.  I figured out how to deepen the hollow, and I learned the difference between a half-pin and a full pin, even though I didn’t have the names for them yet.  A little bit at a time, I shaped first the tail, then the socket, then the pegs, until everything slipped together in a not-particularly-perfect fit.

Now I get dovetails.  I understand them.  I know how to make more, and I know what I have to do to get better at them.  It’s not in a fancy video, it’s not in the right measuring tool or a special gadget, although such things might help.  Rather, it’s in the patience and care of the woodworker.  It is in the heart of the self, the one who is willing to pick up the Saw, and the Square, and work at the Vise and the Bench.  Let the wise understand that the Saw is a type of Sword, as the Square shares kinship with the Wand.  The Vise shares certain characteristics with the Chalice, and the the Workbench itself is a cousin of the Pentacle.  And now I have a talisman to see me into the evening, a thing of power and skill that shows the patience, the learning and the thought-craft behind Maker work and behind Design.   The Making of it is all that I need from it for now, and it has imbued both itself — and me — in a nimbus of dedication to the Art.