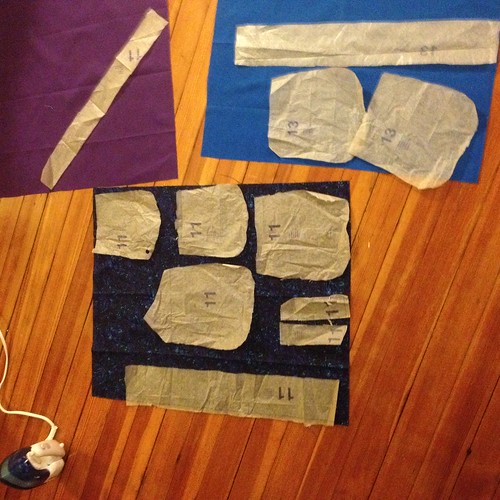 Last night I cut up some fabric and made a belt pouch for my lady, who is helping another friend of ours at various Renaissance festivals and SCA events this summer.  I don’t know that this belt-pouch will be “period” by the rules of such things, but it’s kind of cute (although it didn’t photograph very well).

The nature of the work is that you cut the fabric for the outside (and attach interfacing to that fabric, to give the overall bag some stiffness).  Then you cut the inside of the bag, the lining; and then you cut the trim “on the bias”, which means “at a diagonal”.  This last piece goes through quite a lot of folding and trimming to give it some shape, but I’ll come back to that metaphor in a moment.

The bag is assembled inside-out. The outside of the bag is assembled outside in — first with pins, and then with lines of stitches either by hand or with a sewing machine.  The lining of the bag is assembled inside-in — that is, with the ‘hole’ of the eventual bag to the inside, and the stitching around the outside.  The bag’s latch or cover or flap is assembled outside to outside, in layers like a sandwich, with the trim pinned around the edges and sewn in place to cover the internal seams.  The flap is stitched to the outside of the bag, and then both bags are placed inside each other, outside-to-outside, so that the lining is on the outside and the bag frame (all that heavy stitching and the flap and the fasteners for the bag) is on the inside. 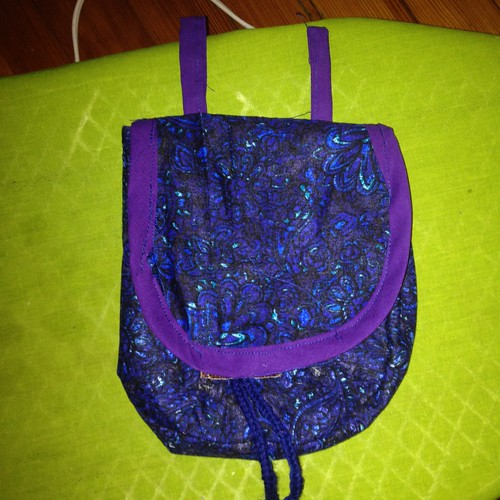 This is the … fourth? fifth? … something like that — belt pouch of this design I’ve assembled.  The first time I had to read the directions carefully about eleven times.  The second time through, I only read the directions once.  The third time, not at all.  The fourth time… I read them once.  The fifth time… this time… I consulted them now and again, but basically did the work on my own.  When I go to make this pouch again, either in a few days or a few weeks, I suspect that I’ll have to go through a similar process of reviewing and reminding, and make new discoveries about the original instructions in the process.

Last night, I brought Dr. Yang’s book to dinner with me.  I got some strange looks, reading a book about Taijiquan, but it felt a little like reading the instruction manual for this belt pouch.  I don’t mean that it was bad — far from it, it’s really quite good — but that it was like reading the pattern for a sewing pattern that I’d basically learned how to do, and discovering some subtleties that maybe I hadn’t noticed the first time around.

All of this is sort of a long way around to the main point of this morning, which is that the longer one practices something, the less likely that one is going to want some outside instruction — even if one needs some outside instruction.  This seems counterintuitive, even backwards.  But when I first learned tai chi, I was instructed in the outward forms — this foot here, that foot there, hand here, elbow like this, and so on.  Now, it’s a question of cultivating the deeper parts of the practice.  And those parts are learned, often, from a more experienced teacher.

When I went back to the instructions for the belt-pouch,it was to look for reminders of how to do quality work.  And the answer turned out to be, “iron more frequently.” Even iron the patterns, for example.  If you look at my first picture — you’ll see that I didn’t iron my patterns.  Dr. Yang says, “the straight course through correct practice is the best and most efficient way to learn tai chi. Unfortunately, few of us take the straight course, and the crooked course is much more likely.”  So it’s proving.

Today I had a great tai chi practice.  But it was rather like assembling a belt-pouch inside-out.  It took some effort to go through the form in a deliberate way, identifying the sloppy bits, and comparing them with the first principles in chapter one of Dr. Yang’s book, to figure out how I’m going to proceed.  A long way around to a belt-pouch.  An apparently useful way-around to a successful tai chi practice.