Oh, I’ve built a workbench in the morning!
Ding-dong the work is almost done!
Look at all the sawdust!
And the budget’s not bust!
And doesn’t all this stuff look fine? 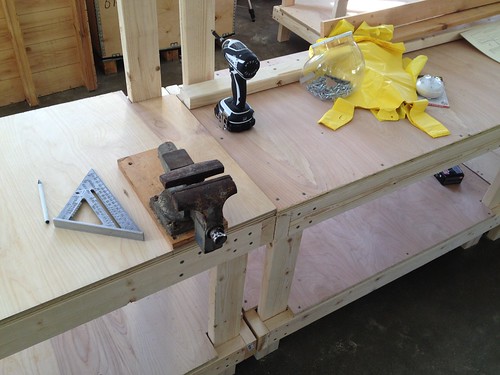 I cut and fitted two more 2x4s to make a special set-space for the vise, drilled and screwed those into place.  And then I put in another 24 shorter screws to hold down the decking of the workbench and the lower shelf.  And now I have a 12-foot long workbench for the New Design Lab.

Originally, this was to be a fifteen-foot workbench.  Then we realized that the room was only fourteen feet and three inches wide at the place where the workbench was going to go.  So I scaled the workbench back to 14 feet long by two feet wide.

Then, talking with a colleague, I realized: wait. We need a place to put all the plywood and other wood that the New Lab is going to use… and I have plans for a rolling cart for storing plywood and scrap wood that needs about two feet of clearance to operate.  And building a thirteen-foot long bench requires changing the dimensions of so many pieces of one element of the workbench, it’s crazy.  It would be far easier to build a twelve-foot long workbench, and then I’d have two-feet-three-inches of clearance at one end for the plywood cart.  And THEN it would be easier to bring new wood into the design lab, because the cart could face the door during the load-in process, and be wheeled around in the middle of the room to be put back into its slot next to the workbench…

Done.  I came in this morning and built the workbench section at two feet by four feet, before I could change my mind.

The result is that I now have three 2x4s and a whole sheet of plywood, to build that rolling cart for wood storage, that I wasn’t counting on. And that means that the whole project is finished, a week ahead of schedule and under budget.

I’ve not written much about magic here for a while.  It’s been a touchy subject since I wrote about it at length several years ago, and saw some of my teaching audience take a leave of absence.  Maybe they’ll return someday.  Maybe they’re returning now, now that I’m writing about Design and Design Thinking again.

But let me take a moment to touch on something important, which I think many in the Magical/occult/esoteric community seem to miss. I’m not talking about Jason, who wrote recently about how annoyed some of his audience is that he’s ‘no longer writing about magic’ as much; nor am I talking about Deb, who followed on that discussion with some thoughts of her own on the reality that magic is not always the subject each and every blog post; nor am I talking about Rufus, whose teachings and exposition of the planetary spirits and their archangels has been a source of deep comfort to me, and who reminded us not all that long ago that joy is the point.; nor am I talking about Gordon, whose follow-on to the words of Jason and Rufus was brilliant and witty.

So let me be super-clear and super-honest and quite careful and deliberate here.

None of this project of redesigning the Design Lab, and building new furniture for it— none of it — would have been possible without magic.

I saw far enough ahead, in this case, to know that I would never get the cabinets and furniture I wanted. That I would have to build them.  So I took a class, and built an Adirondack chair.  I changed my mind from that of an academic who never got his hands dirty, to a workman who loves the smell of sawdust and the look of primer paint on his boots.  I proposed the change. I learned enough accounting to write the budget for the program, learned to navigate the aisles of hardware stores, practiced with a buzz saw on cheap plywood, cruised Pinterest for design plans.

But it goes deeper than that.

Sure — I got a boost from Jason’s strategic sorcery course, from Rufus’s course before the book came out, from Deb’s Arte of Glamour and the New Year, New You.  I won’t even begin to explain the debt of gratitude I owe to John Michael Greer, which is deep. Skills acquisition — everything from carpentry to electronics to weaving — accomplished through magic.  Foresight and hindsight? Magic.  Intention and self-discipline and direct purpose? Magic.  Skill at writing? Magic.  Mastering geometry, one proof at a time? Magic. Becoming an artist (Thank you, Dave Gray)? Magic.

From a certain point of view — quite possibly the correct one, as it so happens, but maybe not — this whole blog is about magic.  Every entry, every month, every year.

And people know it.  Maybe they use the term magician. Maybe they call me a wizard.  Maybe their jaw drops in amazement about what I can do, or know. Maybe they just bring me problems to solve, and sigh in relief when I show them solutions that they hadn’t thought of.  They come to me because I deliver results. Really.

Did the work. Learned the Art. And someone made me the t-shirt. 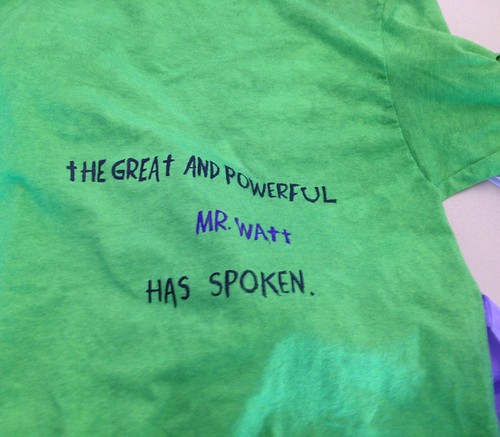